I went on two walks this week with PEDS’ Ian Sansom, the first through Midtown with a group of students and locals, and the second in Clayton County’s Southlake Mall and Olde Towne Morrow yesterday morning. While the former was a much more enjoyable walk, the latter was far more educational.

On Monday evening, I walked from Park Pride’s Parks & Greenspaces Conference at the Atlanta Botanical Garden to the Fox Theatre where the PEDS walk was scheduled to begin. From there, we walked down Peachtree, looking for construction sites that blocked off the sidewalk. It didn’t take us very long before a we encountered a “sidewalk closed” sign directing us to cross the street. 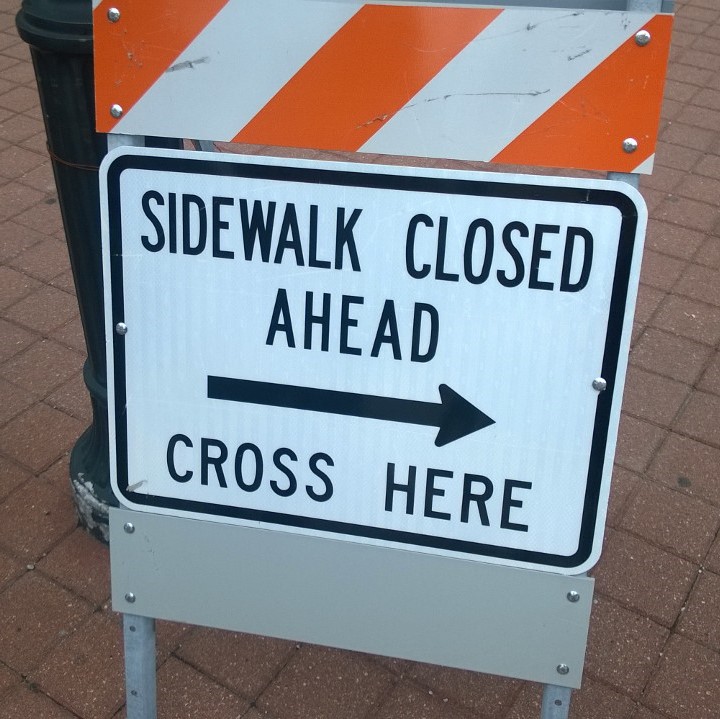 “Everyone should be a ten minute walk from open space.”

In Midtown, a part of the city with wide sidewalks on both sides of nearly every street, this isn’t a huge problem. We just crossed the street and kept going. Midtown puts such an emphasis on walkability that “everyone should be a ten minute walk from open space,” Kevin Green, President and CEO of Midtown Alliance, said that same day at the Parks & Greenspaces Conference. We wrapped up our walk with a few more examples of construction site sidewalks before sitting down at Steel Restaurant.

My trip to Clayton County could not have been more different.

As I took the train South to the College Park station where Ian and I would catch the new 196 bus, a stranger headed to the airport serendipitously asked me where he could walk around down there. “Yeah, you know, is there, like, anywhere to just walk around or explore around the airport?” he asked me. “Not really,” I replied. “If you want to walk and explore, you better turn around and get to Downtown.”

When Ian and I finally headed out on the 196, everything was off to a pretty great start. Our bus driver was pleasant and polite, the bus was one of the newer models, smoothly speeding down I-85. The bus was astonishingly full; for anyone who’s ridden a MARTA bus during non-peak traffic hours, you can imagine my surprise that the bus was almost entirely occupied.

If the environment is inhospitable in Clayton, the riders are far from it

In lieu of participating in MARTA back in 1971, Clayton County developed its own bus system, dubbed C-Tran, despite growing demand for MARTA during the 1990’s and 2000’s. When Clayton County could no longer afford to maintain C-Tran in 2010, demand for MARTA grew even more. Finally, the decision to join the City of Atlanta, DeKalb, and Fulton counties’ inclusion in MARTA was put up to vote in November and passed with overwhelming support.

The landscape of Clayton County is dominated by Georgia pines and by cars–not just on the road, but by auto-shops, abandoned used car lots, some struggling stores, drive-thru’s, and more gas stations than you can count. It’s the defining characteristic of this place.

Our first stop was outside of an apartment building just off I-85. I was surprised by the quality of the sidewalks, or the fact that there were even sidewalks on both sides of the road as far as I could see. However, there was no shelter or bench at the stop (granted MARTA has had a very short time frame for rolling out these routes). In the duration of our trip, I see only two shelters and benches, which makes the system feel a little inhospitable.

But if the environment is inhospitable, the riders are far from it; nearly everyone on the bus is polite and respectful, a far cry from many scenes I’ve seen on buses in Atlanta proper. At one point, I overheard a conversation between a young girl and her mother sitting across the aisle from me: “You like the bus?” Her mother asked. The young girl just smiled and nodded in reply. A few minutes later, another MARTA bus running in the opposite direction passed by and the girl pulled on her mother’s shoulder saying, “Look mama, another bus over there!”

The bus stops at Southlake Mall before making the return trip to College Park, so we get out and walk around for a bit. When we get back onboard the bus, a MARTA attendant hands me some brochures. “Here’s some info on how to ride MARTA,” she says with a smile. It still surprised me: They haven’t had MARTA here, of course MARTA’s handing out pamphlets.

On the ride back to the train, we watch as a woman crosses 10 lanes of traffic on Tara Boulevard to get on the bus. For a moment, she was stranded on the median in a swirling ocean of traffic, and was out of breath from running across the last five lanes when she got on the bus.

This is the future that many suburbs face, of dealing with the consequences of no longer being able to afford the cars their communities were constructed for. This future is already playing out in cities across America, but is especially strong in Atlanta; a recently published Brookings report illustrates the dramatic increase in distance between jobs and residences in major American metropolitan areas in 2012 compared to 2000 statistics. According to the Brookings:

Residents of high-poverty and majority-minority neighborhoods experienced particularly pronounced declines in job proximity. Overall, 61 percent of high-poverty tracts (with poverty rates above 20 percent) and 55 percent of majority-minority neighborhoods experienced declines in job proximity between 2000 and 2012. A growing number of these tracts are in suburbs, where nearby jobs for the residents of these neighborhoods dropped at a much faster pace than for the typical suburban resident (17 and 16 percent, respectively, versus 7 percent).

Atlanta was one of the cities hit the hardest during that period, ranking 87th out of the 96 metro areas analyzed. As jobs became increasingly suburban, those without access to personal vehicles or without connection by means of transit were left ultimately unable to pursue them. As Darin Givens, AKA ATL Urbanist, said on the matter, “The wealthier classes in the Atlanta region are able to absorb these costs of sprawl in their personal finances. But everyone else is paying a considerable price — both directly and indirectly — for our dependency on cars.”

Most of the bus ride after that was fairly droll, until later when an older man got on the bus at a stop about 20 feet from a carwash. After sitting down, he asked the MARTA attendant something Ian and I had been mulling over ourselves. “Why do they put a bus stop down in front of a carwash instead of by the corner where people are walking? What, are people going to drive their car, get it washed, and hop on the bus? They don’t need the bus! It makes no sense.” Ian got his contact info and tried to answer some questions, but he was fired up.

Like many in Atlanta tired of the region’s transit troubles, he doesn’t want answers, he wants actions.

4 thoughts on “A Stroll In Midtown, A Struggle In Morrow”