I didn’t know exactly what to expect as I walked up the steps from the platform at Lindbergh MARTA Station and the anticipation persisted as I sat in the lobby of MARTA’s headquarters. “Someone will be down soon,” an unknown voice told me over the phone at the desk after the attendant couldn’t find my appointment, made weeks in advance, on his computer. So there I sat, anticipation turning to anxiety as I worried that something had come up and my meeting had been canceled last minute. Sure enough though, after a few minutes an assistant appeared to take me to the office of MARTA Director of Marketing, Jennifer Jinadu-Wright. Finally, I was going to sit down with her and the person behind MARTA’s Instagram activity.

Glad to see some clouds on this hot day as I exit the North Avenue rail station. #itsMARTA

Although I had direct-messaged and emailed back and forth with him, this was the first time that I was face to face with Adam Shumaker, the manager of the marta_explorer account. Sitting in the same room with someone you meet online is a little surreal, and Adam was a little quiet at first, which is understandable: As a photographer and photojournalist, Adam is used to calling the shots, not being the subject of them.

“I remember trying to think, ‘should we do Myspace or Facebook?'”

I first wrote about the transit agency’s use of social media, especially Instagram, back in April and since then have only become more fascinated by it. When I asked Jinadu-Wright about the history of MARTA’s marketing efforts, I was surprised to learn just how long she’s been developing the agency’s social media strategy–over 8 years. “We started looking at the growth in social media… By the time I started looking at it, Myspace was still around. I remember trying to think, ‘should we do Myspace or Facebook?'”

As MARTA’s latest marketing foray, planning the Instagram account was a bit of an enigma. It was a decidedly different direction for the transit agency compared to its social media presence on Twitter and Facebook, and not just because of the medium. While the others are used to dispense service announcements, Jennifer wanted the Instagram account to illustrate the lifestyle one can lead in Atlanta by taking MARTA. She asked herself, “How can we have an Instagram account and really have it be attractive to the urban sort of person who lives and likes to go out intown, in our service area?”

In her search for how to make transit appealing to Millennials, Jennifer looked at the Instagram accounts of Warby Parker and Starbucks for inspiration. These accounts, she said, take their products and use Instagram to turn them into more, into experiences that are cool, that reflect modernity, efficiency, and simplicity.

On Instagram, taking transit takes a backseat to the experiences portrayed.

She realized that is exactly what a MARTA Instagram account would have to emulate; in each post, taking transit would take a backseat to the experiences portrayed. And it would not be used for service announcements.

With that idea in mind, only one question remained: “Well, who would be a great person to do this?”

For Jennifer, the choice was clear: there is no one better suited for the task of illustrating MARTA’s benefits than Adam. For one, he takes MARTA everywhere, literally. He and his wife live in Downtown Atlanta, and neither have cars. (“Don’t hold it against me, but I have owned a car before,” he later joked.) Not only does he use MARTA for all of his travels, he knows practically every route off the top of his head. The guy is a human encyclopedia of bus routes and departure times. 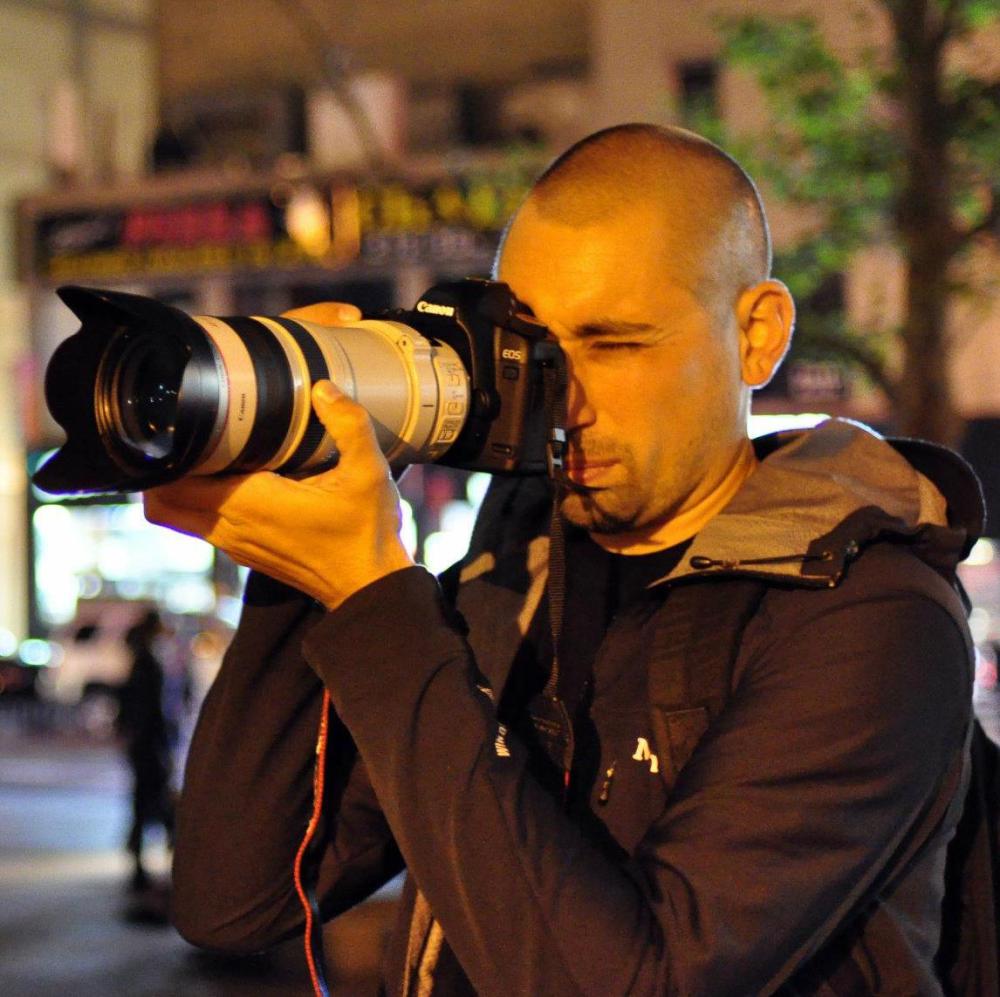 The fact that Adam is a professional photographer is a pretty important part of it, too. Between his Blackberry, iPad, and DSLR, he maintains a massive library of images and usually posts on the marta_explorer account at least once a day. Each post is part of that story Jennifer wants to tell, but it’s also just Adam’s reality. “I have not changed a single thing about my life,” he says with a smile, “Other than documenting it.”

My multimodal view in downtown this evening. The 110 bus making its way down Peachtree street, passing the MARTA Peachtree Center rail station, the @atlstreetcar tracks, a cyclist, and lots of people walking. I love experiencing the real Atlanta without a car! #itsMARTA

Be it on the commute, on the way to a lunch meeting, sitting at a café, or hiking along Sweetwater Creek, Adam displays not just how far MARTA’s buses and trains actually reach, but how many places across this sprawling city are reachable with just a MARTA pass. Rather than being hindered by the absence of an automobile, his pictures and posts express the freedom that’s possible by planning around the transit system. He doesn’t have to worry about parking and only sometimes has to think about traffic, which is a staple part of life for most people in Atlanta.

On the Route 2 bus from lunch in Virginia Highland to coffee in Decatur. Door to door service along Ponce de Leon Avenue! #itsMARTA

It's the weekend, so I'm at farmers markets via MARTA buses. This is the @freedomfarmersmkt at the Carter Presidential Center, right next to bus route 16 from 5 Points – and the 102, which connects both to North Avenue and Edgewood-Candler Park stations. #itsMARTA

Rush hour traffic. Rain. $20 parking. I have no idea what that's like. My ride is a train just below the @thefoxtheatre. Here to see the opening night of the Broadway musical "Motown." #itsMARTA

His posts aren’t just good shots, they’re educational, too. He includes the routes he uses to get to his destinations and sometimes time estimates to help make the case for going carless. “To me, that’s the most compelling visual,” Adam exclaims, “to say ‘Look, that bus doesn’t just drop you nearby, it’s RIGHT HERE, at this festival, at this coffee shop.'”

Adam was also integral to another of MARTA’s Instagram initiatives, too; he’s partly responsible for getting the #weloveatl exhibit in Five Points MARTA Station. He attended some of #weloveatl’s “instameets,” and initiated contact between #weloveatl and MARTA. After negotiating the details of the deal with #weloveatl, MARTA was enthusiastic about the idea and sold some advertising space in the station to #weloveatl for the pictures. The station not only looks better, but it promotes the pride that so many Atlantans already share online and gives it a home in the heart of the city.

More importantly than that however, Adam has been dismantling the image in Atlanta (and elsewhere) that transit, especially buses, are just for poor people. His posts show that MARTA makes life simpler for everyone, especially those who plan to use it as their main mode of transport.

And the data pretty much agrees: According to the APTA (American Public Transportation Association), Atlantans like Adam who ride MARTA instead of owning a car save on average over $10,000 every year. Granted, that research comes from a transit advocacy group and doesn’t account for missed rides (of the fault of the rider or otherwise), that’s still ten thousand reasons to get on board with MARTA.

So, has being on Instagram actually helped increase MARTA’s ridership?

Well, there’s at least a correlation. In April 2013, the Associated Press reported that MARTA was facing the only serious decline in ridership since 2001 out of any transit agencies across the nation and that that trend would continue. In the past two years however, MARTA has made a number of changes to improve safety, performance, and public perception. As a result, ridership has been steadily increasing year over year, and in the almost year since Adam started posting his pictures on Instagram, those numbers have jumped even more. According to another report from the APTA (PDF, pages 2, 8), MARTA saw an increase in heavy rail ridership of 5.52% and an increase in bus ridership of 8.77% from the first quarter of 2014 to the first quarter of 2015. That’s an increase to the tune of a couple million more riders.

My train arriving at Kensington station. Headed back downtown from #stonemountain was even faster at rush hour on the 221 Limited bus, which got me here in just 20 mins from Stone Mtn! #MARTA #itsMARTA #express #trains #transit #exploregeorgia #discoverATL #weloveatl #MARTAexp

Much of that increase is resultant of MARTA’s efforts to make the system safer, more reliable, and more modern, but Adam can confirm that more people are riding as a result of the Instagram activity, too.

“Anecdotally, I can tell you a number of people that I know or have observed have said that they are riding [MARTA] just because of things they have seen on either #WeLoveAtl or Instagram,” he tells me. “I certainly have users comment regularly that they see a place I’ve gone and didn’t realize that they could use MARTA to get there.”

“I can attest to that,” chimes in Saba Long, part of MARTA’s media relations team who joined us midway through the meeting.

“I so often get comments back from users that said, ‘Wow, I didn’t know about this or that,’ or ‘You can get there on this bus?’ That to me is the most rewarding thing, that other people on Instagram can see that I’m actually living it, and they can, too.”

At this time, MARTA is not planning on expanding to other emerging social media platforms (live service announcements on Periscope anyone?). When pressed for comment, Director Jinadu-Wright replied, “We’re always looking for the next thing. So we’ll see.” In the meantime, don’t expect to see MARTA in your Snapchat story stream or Periscope feed any time soon.

Instagram is already a crowded medium, filled with great pictures of breakfasts, puppies, and cats–but also of brands, companies, and advertising shills crying out for attention in the chaotic hellscape that is the Internet. In the midst of all of that mess is marta_explorer, not begging for likes or clicks on a link in the bio (I’m guilty of it, too), but just trying to tell a story and shed some light on a silent truth in Atlanta.

That, believe it or not, big city-living in Atlanta is not only possible, it can be pretty picture perfect, too.

View from the train on the way back to Five Points downtown and home. #itsMARTA

This piece has been updated to reflect that Adam was not directly involved in negotiations between MARTA and #weloveatl for advertising space in Five Points MARTA Station, but rather initiated communications with #weloveatl after attending their instameet events.

3 thoughts on “The Man Behind MARTA’s Lens”